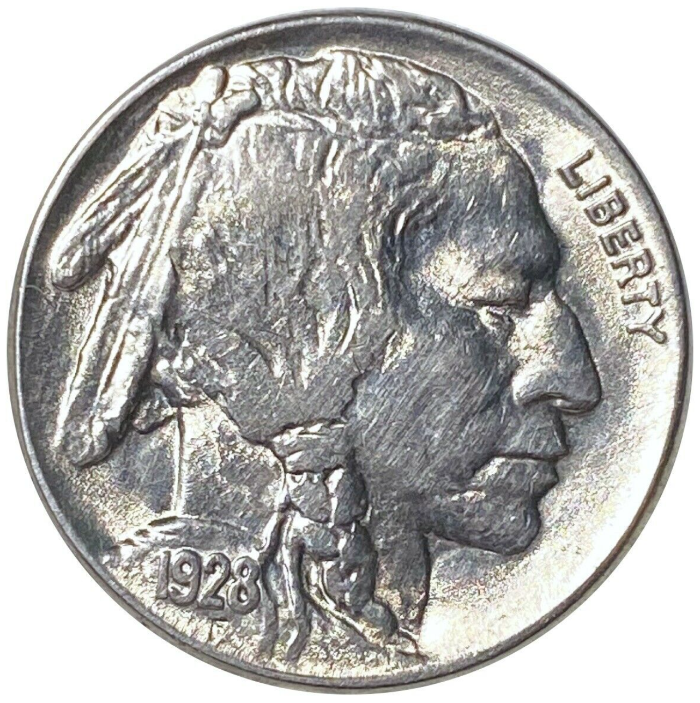 The 1928 Buffalo Nickel is a stunning coin, with a trio of versions to look out for. It’s not prohibitively expensive, but the best versions are worth a decent amount as the coin heads towards its centenary year.

Here’s everything you need to know about the 1928 Buffalo Nickel, from identifying the different types to specific values and a buyer’s guide.

The three different versions are due to the locations in which the coins were minted back in 1928. Three cities were tasked with production, so we’ll discuss each one in detail below. As with many US coins, the majority were produced in Philadelphia. 23,411,000 were made in total in 1928, so this unminted coin is by far the most plentiful.

The two mints below placed their mintmark on the reverse below the buffalo.

This means that you’ll be able to tell the difference by looking out for a lack of a mintmark.

Over 23m is a large amount, and that has led to an abundance of 1928 Buffalo nickels in the present day. With 6,436,000 in total, the 1928 D tally makes up just over 25% of the coins produced in Philadelphia. These were made in Denver, which is how they came to have the D designation.

You’ll find a small D mintmark inscribed into on the reverse below the buffalo. Given the smaller numbers produced, they’re considerably rarer than the unminted coin found above. In a running theme, you’ll see a small S mintmark inscribed into on the reverse below the image of a buffalo.

Over 500,000 more coins were made compared to Denver, but that hasn’t had a significant impact on the overall values.

In fact, the S is worth up to four times as much, making it the most expensive of the trio. Although not many you will find some 1928 Buffalo Nickel Error’s for sale on eBay at any given time (at the time of writing this update we found 12 for sale).

If you have a 1928 Buffalo Nickel Error and would like an estimated value please email us at value@coinvalueinvestor.com. On the whole, 1936 Buffalo nickels aren’t worth much, unless you’re looking at uncirculated copies.

For example, the D nickel is worth roughly $100 if it’s still as shiny as the day it was produced, while the San Fran version has a selling price of $370.

The radiating silver white luster is easy to identify.

Despite being produced in high numbers, the majority have been lost or destroyed over time.

As a soft metal coin, they weren’t the most durable, to begin with, so it’ll be slightly more valuable if it still has a legible mint mark.

More valuable versions of the Buffalo nickel include;

As you can see, there are more popular options from the 1920s, and the majority come from San Francisco.

Given the values, there are a number of counterfeits on the market at any given time, so we’d advise sticking with graded versions whenever possible.

Only three mints produced the 1928 Buffalo Nickel; Denver, San Fransico, and Denver. More about the locations are listed below.

If you purchase a 1928 Buffalo Nickel and it fails to display a Mintmark it is from Philadelphia. The 1928 Buffalo nickel is also known as the ‘Indian Head Nickel’, for obvious reasons. It shows a Native American on the front of the coin, next to a small inscription of the word ‘liberty. It was designed by sculptor James Earle Fraser, with a mix of 75% copper, and 25% nickel.

You can tell he knew what he was doing, creating a timeless coin that is seen as an iconic piece of American history. Indian Head or Buffalo Nickels were produced between 1913-1938, so this is a great release midway through the run.

How much is the 1928 Buffalo Nickel in Poor Condition Worth? Between $4 to $8

There are no known common errors for the 1928 Buffalo nickel, so if a coin looks strange, it’s probably been worn away or wasn’t minted properly in the first place.

The 1928 Buffalo nickel is a great entry-level piece, with three coins that are a great Kickstarter for any collection.

The very best versions have to be seen to be believed, and look like they could have been minted yesterday.  Given the age, it’s clear that this coin is hard to find in great condition, and the S version rules the roost.

We’d advise you to pick up the best versions possible if you’re buying the coins purely for investment purposes.

The S is already beginning to pull away from the Denver coin in terms of overall values, as it’s certainly the pick of the bunch.

Overall, the ‘28 Buffalo nickel has a strong design, and it’s part of one of the more popular sets for coin collectors and hobbyists.

It’s hard to find many flaws, aside from production numbers being slightly higher than some of the others from the decade.

How much is a 1928 buffalo nickel worth?

A 1928 Buffalo Nickel is worth $30 to $90 in Uncirculated (MS+) Mint Condition. For more details in regards to exact value email us at value@coinvalueinvestor.com.

What Buffalo nickel is worth money?

Buffalo nickel worth the most money is the 1913 Liberty Head V Nickel and the 7-D Buffalo Nickel.

What is the rarest nickel?

The rarest nickel is the 1913 Liberty Nickel.